We slept in a little bit, and decided to venture forth with our trip to Bolzano, a city close to the border of Austria. However, I checked the traffic map and was dismayed to see traffic jams lit up everywhere; the 90 minute drive would take more than two and a half hours. We decided to go for a train ride. This time, instead of hiking to a distant bus stop and then risking getting on the wrong bus at the end of a long day, we parked at Porta Nuova train station in Verona. It was only 7 Euros for the day, which is a nice bargain in Europe.

We were fortunate to get train tickets from a vending machine, and the next train to Bolzano Bozen station was leaving in twenty minutes. That was easy enough. But the train turned out to be uncomfortably crowded, packed with screaming infants and children. Our assigned seats were already occupied by a couple of Italian families who admitted to us that they had bought tickets from Rome to Verona, but apparently it was common to do this and then stay on the train a few more stops, to wherever they wanted to go. Seeing our confusion, some family members shuffled into different seats, and several stops later, the train emptied enough for us to move to a slightly quieter seating area.

Bolzano is a pleasant mountain town that looks and acts more Austrian than Italian. Most of the signs are in German, and it seems everyone there is bilingual or trilingual. A forbidding-yet-scenic Gothic cathedral dominates Walther Square at the center of town. There’s also an interesting statue of a nobleman with lions. Our first order of business was to grab lunch before all the restaurants shut down (most restaurants in Italy stay closed from 2 Pm until 7 PM). We found a lovely place shaded by umbrellas and facing the cathedral, and Brian got to speak German for the first time on this trip, ordering our food for us from an Austrian waiter.

While eating, we saw lots of hikers with huge backpacks and walking poles, and figured they must have come out of mountain trails. We also noticed a van parked nearby that said “Runklestein Castle – Gratis,” implying a free shuttle to the castle which we wanted to see. It drove away before we were done paying our bill, but it returned within 20 minutes. Sure enough, the driver was happy to take tourists to Runklestein Castle. We hopped into the gloriously air-conditioned shuttle, which we had to ourselves. The driver was playing country music from the U.S.

The shuttle dropped us off at the foot of the castle hill, at a cobblestone walkway that winds upward at a steep angle. Up we went. This walk is scenic, but it would be a hardship for anyone with mobility problems. The cobblestones protrude a lot, and also worn smooth, so they’re slippery and bumpy to walk on at the same time, and the path is quite steep.

However, this was by far the most interesting castle of our trip, and well worth seeing. From what I gathered from the English-language brochure, the castle was originally built in the 12th century and soon bought by local wine merchants, who seem to have used it as the medieval version of a party house. This castle is renowned for its well-preserved “secular frescoes.” Before seeing the castle, I assumed that meant idyllic scenes of picnics and kneading bread. These frescoes are a lot more interesting than that. 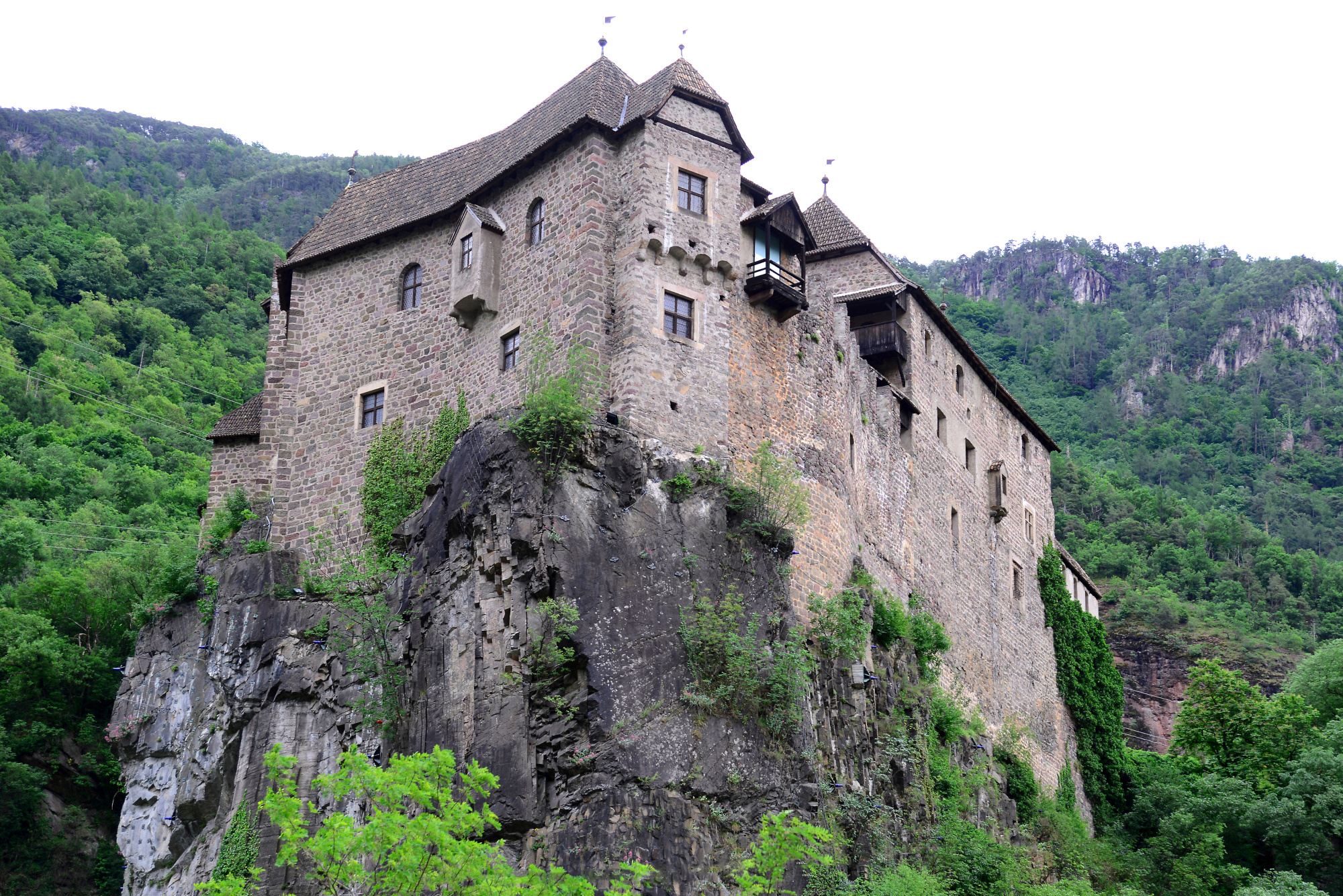 Also, I figure this castle must be really off the beaten track, because the gift shop is tiny—mostly books in German and Italian only—and the elderly lady at the ticket counter was alone there. She seemed surprised that we came all the way from America.

Anyway, we proceeded with our self-guided tour. Unlike other places we had visited on this vacation, there were lots of places to sit and rest, and quite a lot of rooms to explore. The frescoes are somewhat worn and damaged, as one expects from paintings 1,000 years old, but instead of showing endless Catholic iconography full of sadness and suffering, they give a wonderful sense of happiness and whimsy, and even a sense of personality. There are scenes of jousts, epic battles, hunts, and ballroom dances. One room, dubbed “the couples room,” is decorated with lords and ladies gazing lovingly towards each other. Another room shows nude men along the upper walls, and they’re painted in a way that I think indicates an artist who was attempting life studies in an age well before the Renaissance. Why nude men? The reasons are forgotten to history, but someone (maybe a lady?) must have commissioned it.

Another room had frescoes of a wide variety of animals, including monkeys, and the species are mostly recognizable. An outer wall showed scenes from ancient Greek mythology, with mythological Giants. A window area shows two lords wooing two ladies; one getting rejected and the other accepted. One of the striking things about these frescoes is the apparent equality between lords and ladies. One odd fresco shows a procession where two ladies, dressed like royalty, are smiling, and the lords between them look inexplicably sad. I can’t guess what that’s about.

Fresco of procession with smiling ladies and sad lords

Other rooms of the castle display ancient tomes and other relics. The tower has an excellent view of mountains, including a local cable car. And there is a tavern which claims to serve medieval traditional fare, although we didn’t test it out.

There are absolutely no religious paintings or relics on display in this castle; at least none that I could see. One room had frescoes of the Cycle of Tristan, which I gather might be vaguely religious, but it’s some kind of epic sea voyage. When I look at the skill of the artist(s), who could not have had any training in realism, since realism in art would not be “rediscovered” until the Renaissance, I get the sense that this castle’s occupants might have been a little bubble of forward-thinking medieval people who managed to isolate themselves from their contemporaries and have an attempt at their own Renaissance, centuries before the real thing. Runklestein Castle was known as a waypoint for Germanic kings on their way to get blessed by the Pope in Rome. I suspect the more pious kings must have avoided it.

After we hiked down the hill, and took the air-conditioned shuttle back into town (that shuttle was very prompt), we had enough time to visit the Archeology Museum which displays the 5,000+ years old mummified corpse of Ötzi the Iceman.

This museum is really worth seeing if you have any interest in prehistory. It’s air-conditioned, everything is in three languages, including English, and the exhibits are arranged so that you can walk through at an easy, steady pace without missing anything. We reviewed the story of how the mummy was found, and then we saw the mummy through a porthole window, where it remains frozen, with remnants of skin still clinging to the skeleton. All of the mummy’s clothes and belongings are on display, with extensive descriptions of what they are and how they must have been made. There is an interactive exhibit where you can see X-rays of the mummy, dissecting his health status, and how he was murdered. Towards the end of the self-guided tour, there is a stunningly realistic mannequin of the iceman as he must have looked in real life, reconstructed by forensic artists and top-notch sculptors. Although the iceman was 40 to 50 years old, he looked like an old man by today’s standards, with a bad knee and arthritis and gray hair streaked with white. He was shorter and smaller than most European women are today, although he had a robust build. His torso tattoos probably served a purpose akin to acupuncture. They’ve done DNA analyses on his genes, and his maternal haplogroup has gone extinct in humankind, but his paternal haplogroup remains alive in Europe.

Otzi reconstruction of the mummy

So that was really cool. After the Ötzi exhibit, we had dinner at a different restaurant in Walther Square, watched a gorgeous sunset, and caught the late train home.

This time, the train was mostly empty. I guess Italians don’t like to travel at dinner time or later, since that seemed consistent everywhere we traveled in Italy. We avoided a loud troop of hikers who looked like girl scouts, and instead chose a train car that was empty except for us. The only strange thing that happened on our ride home was a back-and-forth chase between a teenage-looking black guy blasting music from his headphones and a no-nonsense Italian train official with a whistle. The guy got into our train car and sat down for maybe half a minute before the official burst in, yelling at him in Italian to get off the train. The guy argued back, then said, “Aw, man!” and ran into the next car. The official chased him, angrily blowing his whistle.

This happened three more times throughout our ride. It resembled a cartoon, like Wiley Coyote chasing the Roadrunner or something. Somehow, the teenage-looking guy managed to keep avoiding the official, who just got angrier and angrier, chasing him back and forth through the moving train cars. That same official told me to take my feet off the seat in front of me. He seemed very put out that I didn’t understand Italian.

That experience was an anomaly. Overall, most of people we encountered in Italy were very kind and helpful, and understanding of our confusion. Many receptionists and ticket-counter people went out of their way to help us, drawing maps for us, or asking their English-speaking friends if they had trouble translating.

Adventure in Italy: Milan and Home