Since Brian had already been traveling for two months, he opted to take a day off, so Amy and I went on our own to see Sirmione on Lake Garda; a spit of land that extends into a mountain lake and features a beach castle and the ruins of a Roman villa.

One thing we did not anticipate was heavy traffic.  It seems that August is when a lot of Italians take vacation, especially on a Friday going into a holiday week.  As soon as we arrived on Sirmione, we passed a few beach tourist plazas, and then we were at a standstill.  We’d already learned how hard it is to find parking in Italy, so when we saw the main parking lot shut down (two cars ahead of us!), we turned around and parked at a further lot, snagging a space out of sheer luck.  Then we resigned ourselves to a long, long walk.  In summer heat.  During a heatwave in Italy.

We couldn’t guess when we might see a restaurant, or if the castle area had anything along those lines, so we ate a pretty hotel outdoor restaurant overlooking the western half of the lake, shaded by umbrellas.  Refreshed, we continued our long trek.  We passed hundreds of tourists, including little kids on scooters and ladies with parasols.  I used my neon green umbrella for shade, since sunscreen runs into my eyes when I sweat.  At last, we crossed the moat into the castle area, which is set up like a scenic fishing village.  The castle itself is a beachside fortress, with extensive walls that extend into the harbor.

Since we had paid for parking until 6 PM, and we didn’t know how long things would take, we decided to go to our highest priority site first: the Roman “Grotto of Catullus” on the very tip of the peninsula.  So we walked past the castle and continued our hike through narrow streets choked with tourists.  Tiny cars attempted to push through the tourists, idling at a speed slower than walking, waiting in vain for the crowds to clear.  When we saw what appeared to be a shortcut away from the stifling, shrieking crowds of families, we took it.  We passed beaches full of bathers, and a shrine for Mary, and a children’s park.  There our path dead-ended.

We had to backtrack a ways, and find a better path up the peninsula.  At some point, we noticed a tram stop swarming with tourists, and we gladly paid 1 Euro each to ride the rest of the way in a covered tram.

The Grotto of Catullus

The sun was beating down, but we entered the Roman grotto area, eager to discover the ruins beyond.  Italian museums lack air conditioning.  The path led into a museum, and it had some interesting exhibits, which we were glad to see, despite sweat dripping off our faces and backs.  There were well-preserved Roman mosaic, pillars, utensils, jars, and other artifacts, all discovered at the site.  This lakeside villa used to belong to a wealthy “poet” nobleman who thrived during the time of Augustus Caesar.  The villa was destroyed by fire in the 3rd century, around the time when the Roman Empire was on the wane.  After that time, it was looted and used for various purposes, but the essence of its ancient grandeur lingers.

We saw that grandeur for ourselves once we stepped out of the hot museum and encountered a long colonnade of brick arches.  Tourists can explore these ruins at their own pace.  We continued onward, and saw ruined room after ruined room.  One part of the complex is labeled “room with a nice view,” and that’s an understatement.  Lake Garda is a crystal clear aqua color, with cloud-covered mountains as a backdrop.  It’s gorgeous.  This villa must have been a nice retreat for ancient Romans on their way between Rome and Gaul.  Local Italians apparently hang out here and swim in the aqua water, or pilot yachts and motorboats past the grotto.

The most impressive part of the ruins, to me, was a pair of a huge archways that must be four or five stories tall.  The fact that they’re in good condition, after two millenniums, shows that the medieval locals took good care of them, and respected whoever had designed and built them.  One of the archways has initials carved near the keystone at the top.  Someone must have used a ladder to get up there. 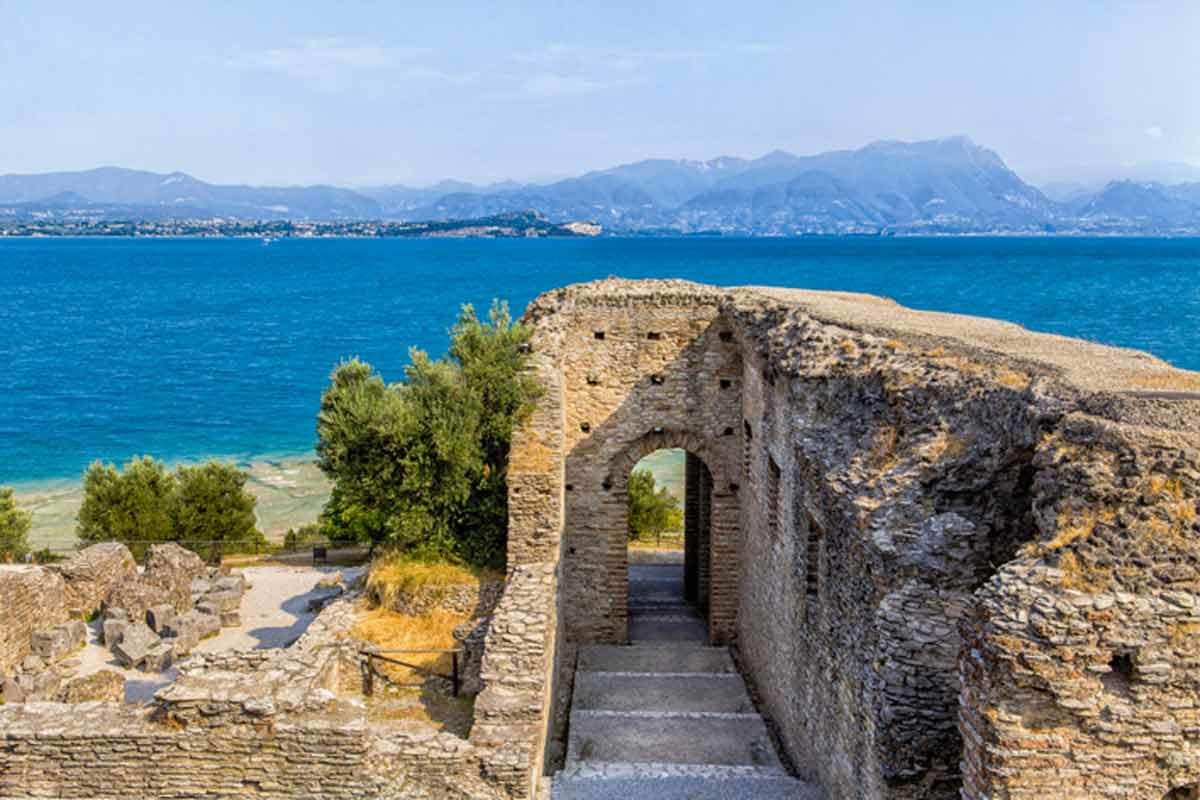 Satisfied that we’d seen what we’d come to see, we figured we had enough time to check out the castle as well.  So we sat at the tram stop and waited.  And waited.  An anxious mob of tourists eyed us.  When the tram finally showed up, it was only hauling one car; not nearly enough room for the mob of people waiting.  We tried to get aboard, but two people can’t compete with families of ten or more.  We couldn’t get on that tram, or the next one, which also took a long time and was also only hauling one car.  Maybe it was the time of the day, but it seemed the trams were no longer adequate.  So we had to walk back in the sweltering heat.  Three miles?  Five?  I have no idea, but altogether, I must have walked at least ten miles that day.  Not good for people with flat feet and plantar fasciitus, especially in a heat wave!

We did take a quick look inside Scaliger Castle.  There are a few drawbridges, but most of what this castle offers to tourists today is beautiful views.  We saw a duck nesting in the moat, and a swan, and some large fish.  From the castle walls, we could see Lake Garda in all directions, as well as the medieval village.

We hurried back to our car, trying not to get a parking ticket.  By the end of that walk, we were both soaked in sweat and exhausted.  But I wanted to do dinner out instead of in the apartment, and I figured we must be near a lot of scenic lakeside towns that would soon open their restaurants for dinner.  So we headed to Desenzano del Garda, which is small by Italian standards, but indeed scenic.  Best of all, for us, the parking lot in town had open spaces!

The restaurant we chose looked nice, but it turned out to be the worst of the our trip, with poor service and food quality that was what you’d find in a low-end American chain restaurant.  We watched the sky darken over Lake Garda as the sun set, and wondered at some tourists in strange outfits, and a family with obnoxiously loud blonde children singing and marching in what looked like goose-steps, doing Nazi salutes.

When we tried to exit the parking lot, the gate wouldn’t open and we got an error message.  So we were stuck inside the lot.  At a loss for what to do, I pressed the button on the machine that said “S.O.S.”  This turned out to be the correct course of action.  An Italian man spoke through the speaker, and he knew enough English to give us very unclear instructions.  He said, “Come to see me.”  Well, he was nowhere in sight.  So I backed my car up a long ways (dangerous in such a narrow aisle, but there was no way to turn around), and we saw a weird booth that looked like a shack.  Amy guessed the parking guy must be inside, and sure enough, he was.  He explained that the validation we’d gotten was faulty, and gave us one that allowed us to exit the lot.

Such a thing can’t happen twice in one night, right?  Apparently it can.  Our second mishap that night was another faulty validation ticket, this time at a tollbooth on the A4 tollway.  The gate wouldn’t let us through.  Once again, I pressed the S.O.S. button.  This time, the Italian man speaking through the staticky speaker sounded a lot less pleasant, and he hardly spoke any English.  After a lot of confusing back-and-forth, during which time the guy sounded angrier and angrier, we explained that we had come from Sirmione, and he told us, “Three Euros.”  That was enough to let us through.

But the worst mishap of that night happened after we were safely back in our Verona apartment and getting ready for bed.  The apartment had two bedrooms; one missing a lock on the door, the other with an old-looking key in the lock.  I opted to use the locked bathroom.  When I was done, I twisted the key to unlock it … and I heard a tiny breaking sound.  After that, nothing I tried could open the door.  I twisted the key every way, I tried to yank it out, I tried to turn the key while turning the door handle in different directions, I tried pushing the key further in, and so forth.  Nothing helped.

Locked in the Bathroom!

So I called for help, and luckily my friends could hear me.  Once they understood that I was trapped in the bathroom, they called the front desk for help.  The nighttime receptionist-manager was alone at the desk, possibly stressed out, and didn’t understand the problem at first.  He entered our apartment, apparently expecting some different problem, and he was surprised when I rattled the door.  “There is a person in there!?” he exclaimed.  Brian and Amy explained that the lock was broken, and he hurried away with assurances that help would be on its way.

I could only hear what was happening outside if I shut off the light, since the light and the fan were operated by the same switch, and the fan was loud.  So I stood by light switch and shut it off whenever I needed to talk to someone.  Brian and Amy assured me that the manager was getting help.  This turned out to be a process that took about an hour, and did not seem to include any locksmith.  The manager returned with a toolkit and attempted to get the key out of the lock, to no avail.  I tried to help from the inside of the door, to no avail.  “But this is incredible!” the manager said, and left again, maybe to find more help.

I wondered if I could sleep on a hard bathroom floor, using a towel for a mattress.  As stressed out as I was, I doubted I would sleep at all.  Meanwhile, Amy was working the far side of the door with the toolkit which the manager had left behind.  She pried off the lock plate, exposing the keyhole.  I could see my friends through the keyhole, but we still couldn’t get the key to slide out or unlock the door.  After a bit more work, Brian jammed the key through the keyhole and it came out in my hands.  The door remained locked.  The stressed-out manager returned, and this time, with the old key removed, he was able to unlock the door using his master key.

I did not lock any more hotel bathroom doors during this trip.