As I write this, I’m sitting outside the ristorante at the base of the Hotel Au Soleil in Saint-Vincente, Italia.  We just spent the last two days in the Val d’Aosta, and we’ll be leaving tomorrow morning for Torino (Turin).

I think I’ve leveled up as a driver in the Italian Alps.  The rotaries are beginning to make sense, and so are the tollbooths.  I’ve learned that [P] Parking signs are rarely as close or convenient as they seem, and parking almost always includes a tariff, even if it’s a small one.  I’m driving a hybrid car, which at first had me worried that it would stall out at every red light or stop sign.  It turns out the engine just automatically shuts off when the car is idle, and it turns back on when I hit the gas pedal.  It takes some getting used to, and the car doesn’t have nearly as much “pick up” as I’m used to, but it gets wonderful gas mileage.  Three days into our trip, and we’re only down half a tank.  We haven’t had to fill up yet.

As for the Alps, what can I say?  They are as majestic and amazing as photos indicate.  The peaks are sharp twists of granite, with glaciers and snow between them, and clouds crowning their summits.  It’s 90 F in the valley, and we can see snow, and it looks close.  Earlier today, we drove through a series of mountain tunnels to the Monte Bianco Skyway, and we paid about 49 Euros per person to ride it up to the Helbronner peak.  From that height, about 11,300 feet elevation, we were able to see Switzerland and France, including the Matterhorn in distance (although it was obscured by a wreath of clouds), and the much closer Gigante peak.  I needed my jacket for about five minutes, since Italy is in a heatwave, but it was maybe 50 F at the top.  We saw people snowshoeing across the nearby glacier, and also rock climbing. 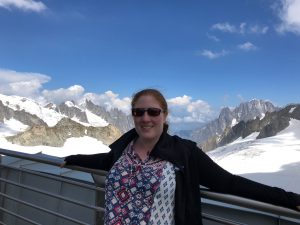 The skyway was built in 2015, and it’s really well-engineered—although this week it could have used air conditioning!  They pack a lot of people into the high-speed cable cars, standing room only.  The summit feels a little bit like a party, with a DJ and cool breezes.  There was also a crystal exhibit, showing that early crystal hunters used to climb these peaks in the 18th century to get crystals.

After that, we drove to the alpine village of Cogne, which is up a gnarly 12 mile cliffside road.  European drivers whip around the hairpin turns and swerve blindly into oncoming traffic lanes.  It makes me wonder how many of them die every month from cliff road accidents.  Anyway, I earned some experience points going up and down that road without dying, and it was pretty fun.  We looked for the Roman aqueduct which is supposed to be around there, but all we noticed from the road was an ancient-looking wall.  Maybe that was the foundation of an old castle, or maybe it was the remnants of part of the aqueduct.  Moving on, we checked out the Lillaz waterfall, which is very scenic, although it requires a bit of a hike to get to.  Cogne itself is gorgeous, with lots of wildflowers and mountains, and several scenic villages that look very Swiss.

We ended up not having time to visit any castles today, although we saw quite a few castles from the road.  Some looked medieval, some were in ruins, whereas others were more recent and ornate.

Yesterday, we spent a large portion of the day walking around the city of Aosta.  Not only is it a beautiful city, but it has an impressive history as a Roman gateway to Gaul.  Not much is left to see from the fallen empire, but there are remnants of a gate, an archway, and some pieces of a theatre left standing.  Against the backdrop of the Alps, this is all impressive to see.  We bought a day pass to see these sites, including a paleochristian church crypt from the 5th century, and an antiquities museum where a lot of local treasures and relics are displayed.  I thought it was interesting to see a chronology of the Roman emperors stamped into ancient coins.  There were underground archeological sites on display, where we were able to walk over plexiglass and see an ancient well, and other remnants.

Aosta has a lot of quaint, walkable streets.  We passed the Hotel de Villes, which is very fancy, and there was an artisan street fair out front.  We ended up eating at the Flavours di Val’Aosta, where I ate some kind of mashed chickpeas and candied bell peppers which they called a ‘burger,’ and it was super delicious.  There was an organ grinder to add to the quaint atmosphere.

Speaking of food, so far on this trip to Italy, I’ve been amazed and pleased to be able to find meals without dairy or cheese.  This was something I’d worried about, since I had trouble when I visited Paris in 2012.  But tonight we ate at our hotel restaurant, and they had several non-cheese options.  I enjoyed a steak with veggies, which were much more flavorful than what we might find in American chain restaurants.

Yesterday, we also took some time to visit Fénis castle, which is about 15 minutes from our hotel.  They only allow guided tour groups inside, and they told us the guide would only speak Italian, but that was okay with us.  Our guide ended up giving the tour in three languages: Italian, French, and English.  It was clear he hadn’t expected to have guests from a few different countries, but he did a great job!  I thought the most impressive part of the castle was a humongous fireplace used for roasting oxen; probably more than one.  Our group of 20 people or so could all stand inside this fireplace and peer up at the distant chimney, which looked pretty creepy.  This castle was apparently built in the 1200s, had its glory days around the 1500s, was abandoned around the 1700s, and used as a barn in the 1800s.

Tomorrow we are going to drive to Turin and see what we see.