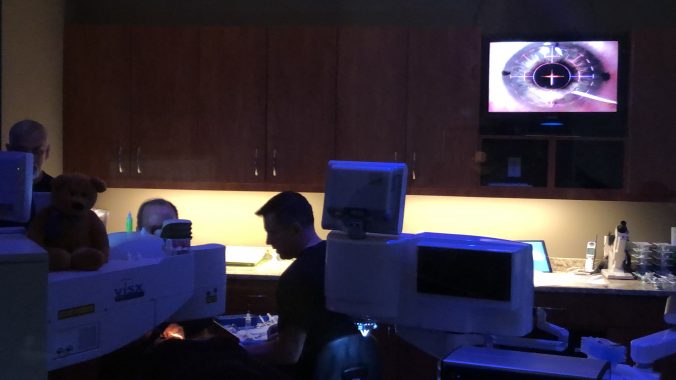 I’ve needed glasses since age six, with -10 vision (which translates to 20/1000), plus mild astigmatisms. Yesterday I got Lasik surgery to correct my myopia and astigmatisms, with an Intralase Wavefront excimer (molecular) laser.

From what I understand, this super-accurate laser was developed in the last 10 years. Prior to 2009 or so, I wouldn’t have been eligible for Lasik. There would have been blades involved, and a recovery period of months, if I could do it at all. This is a new kind of iLasik, which should have me recovered and seeing 20/20 within a week, and fully healed within 3 months.

You may be wondering what the procedure feels like.

First, they gave me a Valium and two Aleve. I sat in a waiting room with Adam (my significant other) with Disney-esque music piped in, so I felt like I was going to visit the land of Tomorrow, or maybe a theme park.

While those meds took effect, an assistant cleaned my eyes with drops and iodine around the skin. The surgeon came in and used drops to numb my eyes, and then used a marker to draw directly on my eyeballs, showing where the astigmatisms were. I was getting super nervous. The surgeon left and came back in to check on me. I must have been freaking out a little, because he backed out, saying, “We’ll wait a little longer for that Valium to take effect.”

Sure enough, I felt calmer after a few minutes, although still freaked out. The assistants put a surgical cap on me, and surgical booties on my feet. They led me to the operating room, which is kept chilly. A large window enabled Adam to sit outside and watch the procedure; he took the featured photo.

Three people were in the operating room, besides me: The surgeon, the surgeon’s assistant, and a laser tech. They lay me down on a bed that can rotate between two large laser machines. One machine makes the incision in the cornea. The other machine corrects vision. While the surgeon worked, the assistant talked me through everything that was happening, and made sure I followed the directions, which was very helpful and prevented me from completely freaking out.

They filled my eyes with numbing drops. Then they prepped my eyes, and began surgery on my right eye first. They used tape to keep my eyelashes out of the way, and a glassy monocle thing to keep my eye open. They used suction cups on my eyeballs, too. It’s a very fast and uncomfortable procedure, where I had to gaze at a blinking orange light while I felt weird pressures on my eye. No pain, due to the numbing drops.

Then that eye was covered, and they lasered my left eye. For some reason, I had trouble focusing on the orange blinking light with my left eye. It was so out of focus, it seemed to fill my vision. The laser stopped a few times, since it was having trouble tracking my eye. But soon it was done.

Immediately after surgery, my vision was streaky and steamed up, as if looking through warped and wet glass. I had to keep my eyes closed. A driver is necessary for Lasik, and Adam led me to the car and drove me home.

The Lasik place gave me eyedrops with antibiotics and steroids to help the inflammation, and told me to use those, then sleep for 4-6 hours, or to rest with my eyes closed. They told me there would be some pain once the numbing drops wore off.

Pain woke me up after about an hour of sleep. It was very intense pain, and I think that may be because I had such a high prescription. My eyes felt badly sunburned, as if I had witnessed a nuclear explosion up close. I’ve had eye pain before from contact lens problems, which felt like hydrochloric acid. This was more like burning. It was very intense. I took a Tylenol, and was alarmed enough that Adam called the Lasik center to make sure it was normal. They said that they pain should go away around 8pm.

Sure enough, it did!

I ate dinner, and noticed that my eyesight was improving in weird ways. It wasn’t 20/20, but it was definitely better than 20/1000. I estimate it to be somewhere in between, maybe like 20/200. Things up close were clear, but things beyond 5 feet or so were foggy and indistinct.

I went to sleep. Friends who have had Lasik say they see very well the next day, and I was hopeful that I’d be able to drive myself to my post-op eye appointment in the morning.

It isn’t quite like that. I woke up seeing much more clearly, and the pain was gone. Far distances still look blurry. Everything looks like it’s though a soft light filter, the way wedding photos are softened. My right eye is seeing much better than the left. This is creating a weird, disorienting effect. If I close my right eye, this computer screen (as I type this blog post) is barely legible due to blurriness. If I close my left eye, it is crystal clear.

My post-op appointment was with my regular optometrist. He said the eyes heal at different rates, and the difference may also be due to inflammation. My high prescription meant they burned away a lot of cornea. He said I am healing well.

For now, this is pretty cool. I can use a computer and read without glasses! We will see how things are in a week, with my next appointment.