Three days go quickly when you’re having fun!  We arrived in Turin, checked into our hotel, then visited the Sacra di San Michele, which is a 10th century monastery on a mountaintop west of Turin.  Like most tourist attractions in Italy, there is a lot of walking once you park.  We hiked up for a ways, past vendors selling souvenirs and cheese, past a man playing a calming musical instrument.  Once we bought our tickets, we were given an English-language brochure so we could follow along with the Italian-only tour group.

The brochure only included five or six points of interest, so I figured it must be skimpy on the information.  The monastery is huge, with multiple turrets, larger than many castles, with extensive grounds and ruins of more ancient structures around it.  But it turns out the tour only goes through a tiny portion of the place, and it does this at a snail’s pace.  The tour guide spent 20+ minutes on each point of interest.  Those of us who do not understand Italian found it tedious.

But what we were able to see was very impressive, anyway.  The Stairway of the Dead includes several tombs and huge windows, with a very Gothic atmosphere.  We walked underneath Gothic buttresses, and under a Roman funerary slab repurposed with Christian symbology, through a doorway inlaid with serpents and swords.  An elderly Italian nun nearly turned away me and Brian, and we’re not sure why.  After an argument with her, she seemed to realize we were harmless tourists and let us in.  We sat in a mass of pews and then checked out a lot of ancient sarcophagi.

Later, we walked through a ruined tower where a woman was said to have fallen to escape rapists, and survived due to the intervention of angels, only to die when she threw herself out of the tower again to prove how blessed she was.  The view from this ruined tower is spectacular, and it was especially amazing for us due to an incoming rainstorm over the mountains.  The sun lit up the ruins area while the backdrop was dramatic clouds over steep mountains.

The next day, we went to Lake Maggiore and the Borromean Islands.  We had planned to make a day trip to Portofino, but we decided that was too far a drive for something that sounds scenic-but-overpriced, like a resort.  Isola Bella was closer.  So off we went, and we are very glad that we saw this amazing lake, which has plenty of its own resorts.

The Borromean Islands were, and I guess still are, owned by ancient royalty whose family crest is the unicorn.  They used a lot of unicorn and clam motifs in their decor, and they apparently had a great sense of style and decor during the baroque period.  At least one of the women in the family was a renowned painter.  Another family member collected exotic plants, and created a truly impressive baroque garden on an island, complete with Roman statues holding bronze sprigs or tools, and albino peacocks roving around.  We glimpsed some kind of pheasant bird colored like a parrot, with crazily bright colors.  There was an extensive grotto with golden horse armor, model ships, and interesting oddities collected during the 18th century. 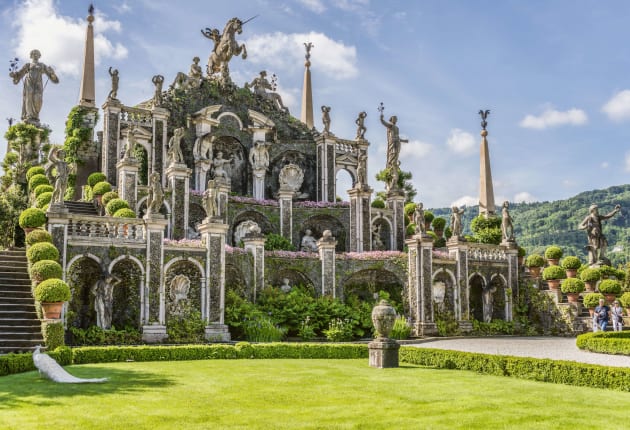 We had to keep an eye on the time in order to catch the ferry boat from one island to the next.  Although we’d bought a ticket for three islands, we only ended up on Isola Madre and Isola Bella, and that was plenty for the day.  After that, on our way home, we stopped to see a statue in Arona which is said to have inspired the Statute of Liberty.  It’s a large statue of a saint, which can be entered and climbed inside.  It was closed when we arrived, which was for the best, since there was an intimidating warning sign about the interior stairs being so narrow and claustrophobic that people aren’t allowed to wear backpacks or carry umbrellas inside.

The Egyptian Museum of Turin

The following day—today—we slated for a relaxed day in the center of Turin.  We spent more than a few hours in the Egyptian Museum, which is a must-see for anyone interested in Egyptology.  This is said to be the biggest collection of artifacts from ancient Egypt outside of Egypt, and it really is a lot.  Egyptian displays usually only have one or two of each thing, whereas this museum had so many artifacts, with such a variety of styles, it gave a better sense of what was commonplace during which dynasty.

After that, we stopped for gelato, which is easy to find anywhere touristy, and artfully put into cute dishes.  We ambled to the Plaza Reale, the royal palace, but we didn’t have time to explore the armory and art museums inside.  We checked out the royal garden, but after seeing Isola Bella the day before, it was underwhelming.  So we headed down a few tourist marketplace streets, and explored the narrow alleys of Turin, which are very European and full of street cafes.

Finally, driving back to our hotel at night, we saw lots of street prostitutes.  Which brings me to the topic of our *weird* hotel-motel.  This place looked pretty respectable on the internet when I booked it.  In reality, it is out in the middle of a cornfield, in an industrial park, on a street of hookers.  Brian has a nice room with a key card that works.  Amy and I have had to ask for a new key card every single night, because ours stops working.  And we changed rooms on the first night because of a missing deadbolt and a key card that was non-functional.  The whole atmosphere of this place is creepy, with more staff than guests visible.  It’s dark in the lobby.  There is weird muzak playing softly in very empty hallways.  The showers have mirrors.  There is a giant stuffed animal panda with fake bamboo as the only apparent decoration.  No other hotel art or wallpaper. Now that I know how easy it is to navigate and drive in Turin, I wish I had gotten a hotel in the downtown area instead of on the outskirts.

Overall, Turin seems to be a rundown city, to me.  There is a lot of graffiti and empty streets, with boarded-up shops and restaurants.  Like most places in Italy, shops tend to close by 6 and restaurants shut down from 2 till 7:30.  This gives most of the city a deserted, desolate appearance, with dry leaves blowing across streets.  Only the downtown area, with the major tourist sites, is busy.

I’ll end this entry with some notes for North Americans about driving in Italy.  Is it scary?  Yes.  Is it fun?  Sort of, yes.  I’ve learned a few things.